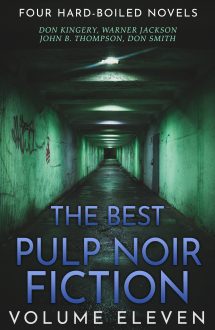 SWAMP FIRE by Don Kingery
Hank Samson comes home from the WWII to find his half-crazed father terrorizing their Louisiana bayou town…and his brutish brother running amok with lust and violence. But Hank has seen a better way to live and now has to choose beween running away with the girl he loves…or staying and fighting his own family.

TEMPLE OF LUST by John B. Thompson
It’s the late 1950s. Ches Markham is an FBI agent stationed in D.C. who is known as a lady’s man…and who uses those skills for Uncle Sam. He’s et-up to be seduced, and snatched, by Dayne Holcombe, a beautiful Austrian seductress, as part of an elaborate scheme by Nazi fugitives involving stolen gold and diamonds. But it all goes violently wrong for everywone. Markham escapes and Dayne flees to Sierra Negro, a volcanic island off the Yucatan peninsula. Markham goes after her, on a mission to foil the plot…but becomes embroiled with Dayne in the passionate, pagan rituals of the ancient Mayans. If his raging desires don’t kill him, the deadly conspiracy could…and take our country down with him

RED CURTAIN by Don Smith
The year is 1959. World War II vet Phil Sherman remained in Shanghai after the war and launched Trans-Eastern Supply, an import-export company specializing in the legal trade of computers with Eastern Bloc nations. Now his business takes him to Europe, where intrigue, espionage, and rampant greed are running wild. He’s approached to sell platinum from behind the Iron Curtain. This leads him into the dangerous arms of seductress Vera Maudet…and puts him in a killing field between the CIA and the KGB.

CAVERN OF RAGE by Warner Jackson
The turbulent flood waters matched their frenzied affair. Not financial ruin, nor even social ostracism, nor even a raging flood could tear the two of them apart from their forbidden love and it’s shattering climax in a cavern of rage.