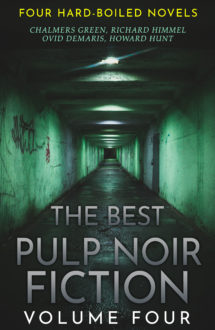 I Like It Tough by James Howard * Killer Take All by Philip Race * Be My Victim by Robert Dietrich * And Be My Love by Ledru Baker Jr.

I LIKE IT TOUGH
It’s 1955 in Neon City, USA. The vice syndicate’s slimy tentacles stretched everywhere through the corrupt city and only reporter Steve Ashe knows the dark story behind the multi-million dollar traffic in dope and white slavery. And because he knows…he’s a walking dead man.

BE MY VICTIM
Coral City, Slade County, Florida in 1956. By day, the tourist robbery is genteel… practiced by scrubbed and bowing clerks, merchants, and restauranteurs who wait all year to gouge and swindle out-of-town customers. But it’s at night that the real money is made… at tourist cabins, at cockfights, and at plush, private clubs where the only winner is the house and nobody seems to care. Nobody except Pop Seegar, who owns everything that makse money and ruins lives in Slade County. But now Bruce Kendall, a stubborn, ex-Navy man & local building contractor, is unwilling to play Seegar’s lucrative, rigged game of graft and corruption… and that is unacceptable to the mob boss. When an attempt murder Kendall goes explosively wrong, and Kendall goes on a rampage of retribution, Seegar finds a woman to lure Kendall to his doom and restore the natural order of vice and corruption once and for all…

AND BE MY LOVE
The blockbuster, million copy bestseller of 1951, a beloved Gold Medal classic, is finally back-in-print to enthral a new generation with it’s raw, powerful description of a passionate love affair that had no limits. She belonged to one man…a violent gangster…but she wanted another, a womanizing writer. So she seduces the writer and tricks him into a quickie Las Vegas wedding that puts them both in mortal danger.