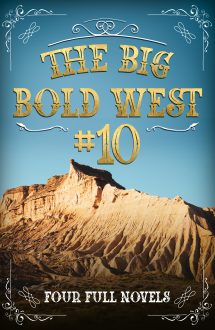 RAILS WEST by Logan Stewart aka Les Savage Jr.
After the Civil War, Big Scott Walker returns to Kansas to discover his ranch burned to the ground Confederate guerrillas…and that his father, his brothers, and the woman he loves have fled somewhere out west. He finds them, endanged by brutal men…and in fighting for them, must flee on murder charges, a wanted fugitive. He evades his pursuers by working on a railroad crew, hauling iron, laying track and battling the Arrapahoe…all while trying to clear his name and reunite his family. Ultimately, that means pinning on a Marshal’s star and confronting his enemies in a God-forsaken town at the end of the line, for the railroad and for him.”[Stewart] peoples his yarn with complex, realistic characters, fine hardboiled writing, and gritty action scenes. RAILS WEST is a very solid, entertaining Western novel.” James Reasoner, Rough Edges Blog

DAY OF THE .44 by Jack Barton
Walt Kincaid is trapped in a ragged stagecoach station with three vicious outlaws that he risked his life to disarm…and who want him dead. But now they are all surrounded by a savage band of Utes preparing to attack. He is facing two bad choices: fighting it out with the Indians on his own, or giving the outlaws back their guns and hoping they don’t shoot him in the back. But even if the outlaws do fight beside him, and they all survive, Kincaid knows that afterwards they will blow his head off with a blazing .44…unless he kills them first.

LONE STAR by Borden Chase
President Andrew Jackson sends cattleman Devereaux Burke on a diplomatic mission to convince Sam Houston to bring Texas into the union…against the efforts of two powerful, greedy senators who want to carve out Texas as a standalone empire. Caught in the middle of the battle is newspaper reporter Martha Ronda, a breath-taking beauty the men want to possess almost as much as they want the land.The book was adapted by Chase into the 1952 movie that starred Clark Gable, Ava Gardner, and Broderick Crawford.

TROUBLE AT MOON PASS by Burt Arthur
Moon Pass was a pleasant enough place.. .until they started putting a railroad through. Then all hell broke loose. Finally they had to call in Dan Doran, the best troubleshooter in the west. Doran was a man who knew only one way to to do the job…and his philosophy was that a singing .44 usually had the right answer. But Doran forgot one thing: it makes a difference which end of the barrel you’re looking down.