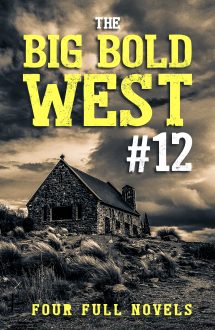 Four classic western novels by four masters of the genre.

ACTION AT WAR BOW VALLEY by Michael Carder
Jim Embree, a foreman of Spanish Spur, knows that War Bow Valley is the key to the whole range and fears that only six-guns will buy it. Penn Drummond owns the country and wants the valley, too. So do farmers like Tom Houghton, a rugged pioneer who knows how to fight. So Drummond starts a war that won’t end until the last man is standing. Jim is determined to be that man.

GUN HELL by Riley Ryan
The pack of armed desperados rode onto Johnny Burr’s land at night, tied him to a fence post, then made him watch while they raped and killed his wife. He only saw one man’s face. Johnny vowed to track him down, across a thousand miles of lawless, gunslinging wilderness, and kill him. But his quarry finds him first…

THE LAST SNOW by Jon Messmann
The final, western masterpiece by Jon Messmann, aka Jon Sharpe, creator of the legendary Trailsman series of western.
Mountain Man Daniel Culver knew when the storms blew down soon from the North Country, the frontier town of Stoddard would be cut off from the world. He also knew what the Cheyenne war drums meant that he heard echoing in the hills. A massacre was coming unless the townspeople fled…and they had to do it now, because nobody had ever made it alive over Snowshoe Pass once the snows began. But no one would listen to the buckskin-clad loner except one tough, independent woman. Together these two had to make a choice: either stay and face certain death battling the Cheyenne, or attempt to escape into a snowbound wilderness that no man had ever come out of alive.

“His atmosphere of camp and trench, march and counter-march, has the look and sound of well-observed truth. Here are plain soldiers in actual war.” Chicago Tribune

When the south called for fighting men, Roan Catlett, Davin Ancrum and Forney Manigault are the first to sign up, three untried cavalry troopers awaiting the onslaught of the Union tide under the command General Stonewall Jackson, learning the taste of victory and defeat, the dulling pain of fatigue and the swift touch of fear, as they struggle to keep the entire Union Army from pouring into the Shenandoah.