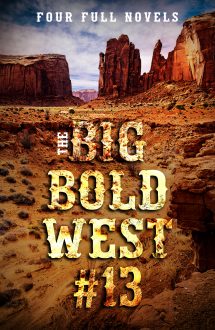 FOUR classic rip-roaring, action-packed western novels by four masters of the genre in one ebook edition.

Colonel Ranald MacKenzie is a good commander. He and his men have a reputation for achieving victory against incredible odds, but right now he needs every able-bodied man for action over the border and can’t spare anyone for another vital mission he needs performed. So he calls in Lt. William Baldwin from sick leave and gives him an impossible assignment: lead 300 Comanche captives to Fort Sill, a harrowing, four-hundred mile journey through territory where hundreds of Comanches are still free and can be counted on to conduct a running fight every inch of the way. Not only that, but Baldwin will have to defend his prisoners against white attack, too — from rabid, Indian-hating settlers to whom the only good Indian was a dead one. As if that wasn’t difficult enough, MacKenzie can only assign Baldwin a single platoon of men to protect his captives. And not just any platoon, but one made up of tarnished men barred from active duty. It’s a journey to hell and Baldwin is willing to lead it.

Texas was a territory crackling with lawlessness and corruption. Brother challenged brother over the land. Hard men fought for power in a place where might was right. Then Clay Farrar came out of Missouri searching for peace…and met dark, beautiful Toni O’Neill, who desperately needed help. To save her, Clay had to take on the entire, gun-ridden territory.

When the trail herds rode into Dodge City, she was there… ready to play any game the cowboys wanted, as long as it was a gamble for very high stakes.

When a man has been on the trail for months, he builds an appetite no ordinary girl or game can satisfy. Johnny Blaise, trail-boss, lover, gunfighter and gambler knows this well. He whetted his hungers in the saloons of Dodge City, and satisfied them in the rooms upstairs…all except his hunger for revenge against the queen of Dodge City saloons.

WINTER OF THE SIOUX by Robert Steelman

The Sioux were among the greatest of Indian nations. Strong, proud and unequaled as fighters. And to the white settlers in the plains, they were predators, a nightmare-made-real. There were few white men who survived an encounter with the Sioux, even fewer who earned their respect and their friendship.

One man did, a professional gambler and gunfighter named Beau Mannix. No one could have imagined, most of all Mannix himself, that one day he would struggle a hundred miles through a blizzard to get help for the “savages”….or that he would be honored and loved by the Sioux, but hated and hunted by his own people.

This is the story of a man with a dream, a vision so strong that it drove him to reject his own people…who was not by nature a warrior, but whose courage, fighting ability, and singleness of purpose earned him a place in the hearts of the Sioux nation.