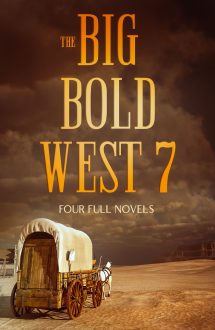 “Prescott writes in the style of A.B. Guthrie in The Way West and The Big Sky. He tells of human emotions, heroic action and exciting adventure.” St. Louis Post-Dispatch

GUNMAN’S SPAWN by Ben Thompson
Into the Big Bend Country rode wild Dunc Stewart, headed for trouble and a girl, Carmelita. Then old Hamp Wallace took got into the game, his blazing guns siding with law and order. Dunc knew that some day he’d be sharing a triple showdown with Hamp and the notorious Jugg Allison…and one of the three was the fastest draw in Texas. They wouldn’t know who it was until the last man was standing.

VULTURE VALLEY by Tom West
Hap Harrigon is on the run for a crime in Yuma and on the vengeance trail, even though he knows it will end at the gallows. He’s chasing the man who framed him and killed his friend. But complicating things is the sudden return of Slick Sam, his former cell-mate and a double-taking, double-dealing snake…who gets him involved in a bank robbery, a swindle, and a feud with sheepmen that draws the U.S. Cavalry into the dangerous mix.

FLAMING GUNS by Burt Arthur
The bandits in Chenango Pass didn’t think twice about blowing off Sheriff Simms’ head…because they knew nobody had the guts to chase them down. But then Mustang Marshall became the new lawman, and he was all guts. He built a jail and soon packed it with renegade scum. Because nobody was above his law, not even the son of the territory’s biggest outlaw. And that’s when hell came raining down on the Mustang Marshall…and he fought back with flaming guns.