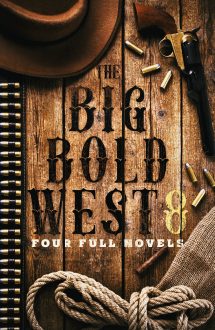 BRAND OF FURY by Jack Barton

They hung Luke Chronister from a cottonwood. They shot down old Jake Pierce in his own corral. And they claimed Ed Raglan put his brand on another man’s steer…so they pistol-whipped him and burned his spread. But Ed Raglan wasn’t helpless like Luke or elderly like Jake. He was a man. And a man fights back.

THE BUCKAROO by Burt Arthur

There was a range war blazing long before Tad Cole rode into Shorthorn. The outnumbered, out-gunned homesteaders were being slaughtered by the cattlemen but still clung to their land. Cole should have kept on riding…instead, he joined the fight against the army of night-riding ranchers and gave the homesteaders a chance at survival.

Hagar is a drifter, self-reliant and traveling alone, looking for an opportunity that hasn’t happened yet. But then he wanders into a strip of Wyoming land that everyone wanted ….ranchers, gamblers, politicians…and they are all willing to kill for it. So is he.

VALLEY OF DEATH by Burt Arthur

Mustang Marshall returns to tame a savage west the only way he knows how… with stone-cold courage and a blazing gun.