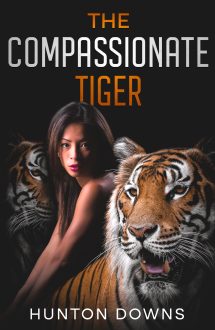 The Compassionate Tiger By Hunton Downs

“A tale of intrigue and violence…if you like a yarn of high adventure in exotic lands, tough and brawny heroes, and sex in heavy doses, this fills the bill.” Hackensack Record

An ancient, Vietnamese parable tells of a tigress who attacks her own cubs…and if the cubs don’t fight back, she kills them out of compassion. Because she knows a cub must learn to kill…or be killed.  Soldier-of-fortune Daniel King, also a former male escort, realizes the parable is the key to the cut-throat world of Vietnam in 1954. To survive, King must outwit Mossard, a rich plantation owner who has hired him as a bodyguard… and who constantly plays both sides of every conflict. But so do Mossard’s wife Charlotte and his beautiful mistress Thi-Tuyet, who both lure King into their beds. King must walk on the razor’s edge of death and betrayal in a world of non-stop greed and sudden violence…or die.

“Excellent…the story of Daniel King is interesting, and always exciting, as he struggles to avoid the destiny of the compassionate tiger and the death it must exact.” The Tennessean

“A mortal struggle for power, a gripping conflict set against a broad, accurately realized background that results in the most exciting novel that has yet emerged out of the tinderbox that is Southeast Asia.” Dallas Times-Herald

“An exciting, swift-moving novel with as dramatic and bloodthirsty a series of situations its possible for a mortal author to conceive. A fast-paced story in the best blood-and-thunder tradition.” The News-Tribune

“There are enough plots, battles and bloodshed to satisfy a reader who likes action and fast-paced, realistic stories.” Miami News

“A fast-paced suspense novel that will hold you.” Birmingham News

“A solid book with terrific color, almost constant action, and a rather realistic look at the political scene…and good reading.” Ada Evening News