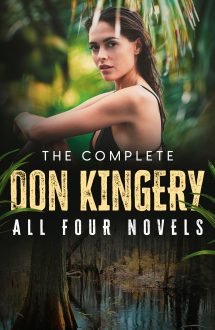 DEATH MUST WAIT
Jed is a poor trapper living in the Louisiana Bayou and supporting his impoverished parents, his drunk brother, and his prostitute sister. His life takes a dramatic turn when he kills a man in a bar fight and is hunted down by a brutal Sheriff. Now Jed must prove his innocence in the face of rampant corruption…or die trying.

SWAMP FIRE
Hank Samson comes home from the WWII to find his half-crazed father terrorizing their Louisiana bayou town…and his brutish brother running amok with lust and violence. But Hank has seen a better way to live and now has to choose beween running away with the girl he loves…or staying and fighting his own family.

PAULA
Joe Carter works as a rigger for rich Houston oil magnate Sam Forsythe and falls for Paula, his boss’ seductive young wife. But she gets pregnant and draws Joe into a murder plot that will either make them both rich… or put him in an early grave with a knife in his back.

GOOD TIME GIRL
Jack Candless is a drunken, cynical, 32-year-old newspaper reporter who covers a rape case in a small, Louisiana town, hoping the sordid story of a sweet, innocent young woman being brutally violated in a rice field will make national headlines, saving his career and his marriage. Instead, he discovers nothing is what it seems, and that a far more frightening story of raw lust and corruption is buried in the dark, violent heart of the bayou.