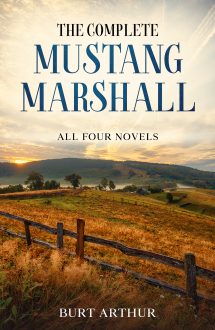 The Complete Mustang Marshall: All Four Novels By Burt Arthur

The outlaw rode the trail alone with a price on his head. Every lawman and bounty hunter in Texas was after his hide. He lived by his wits and by his gun. The outlaw had many names, and just as many notches on his six gun. They called him The Black Rider. He wasn’t running. He was seeking vengeance in Deadwood. But first he’d have to save a helpless woman from a pack of land-grabbing killers…even if that meant teaming up with the relentless lawman who’d vowed to track him down, dead or alive. That was fine with both men. They’d just have to kill each other later.

Mustang Marshall returns to tame a savage west the only way he knows how… with stone-cold courage and a blazing gun.

The bandits in Chenango Pass didn’t think twice about blowing off Sheriff Simms’ head…because they knew nobody had the guts to chase them down. But then Mustang Marshall became the new lawman, and he was all guts. He built a jail and soon packed it with renegade scum. Because nobody was above his law, not even the son of the territory’s biggest outlaw. And that’s when hell came raining down on the Mustang Marshall…and he fought back with flaming guns.

Mustang Marshall finally returns home…but he isn’t welcome. And a knife-wielding killer is waiting to gut him from head to toe.