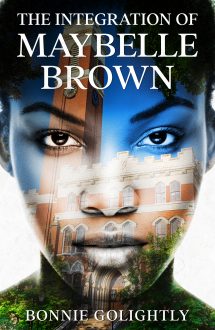 The Integration of Maybelle Brown By Bonnie Golightly

An intimate, explosive, and shocking story of racism and change in the deep south…back in print after sixty years.

A small town in the deep south is rocked to its racist core Maybelle Brown arrives from Philadelphia to live with her grandmother…and becomes the first black student ever enrolled in the local college. But that’s only the beginning of the explosive problems her arrival creates. Because Maybelle also becomes romantically involved with a white man, crossing an unthinkable line in a community terrified that a rising tide of color will destroy their heritage.

This powerful novel is told from the point of view of a white woman whose father is a faculty member at the college and was likely inspired by the fiercely independent, barrier-breaking author’s own history. Bonnie Golightly (1919-1998) was from Murfreesboro, Tennessee, where her father was a professor at Middle Tennesssee State University. She later moved to New York, where she became a folk singer, socialite, bookseller and a prolific writer perhaps best known for losing a lawsuit that accused Truman Capote of basing “Holly Golightly” in Breakfast at Tiffany’s on her. She wrote several pulp novels (including The Wife Swappers, The Beat Girl,  and Shades of Evil ) and movie novelizations as well as  non-fiction books on LSD, the paranormal and sex.