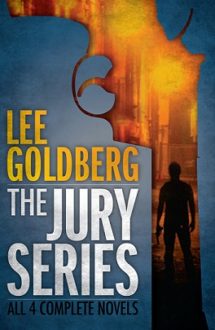 THE JURY SERIES By Lee Goldberg

“Top-shelf 80’s adventure fiction. The Mr. Jury books are probably about the most fun you can have doing so vicarious vigilanting. There’s a reason Goldberg is still a successful author. There’s plenty of smooth and fast action.” Bloody Spicy Books Blog

The series, published in 1985 under the title 357 Vigilante, was written by “Ian Ludlow”… a pseudonym for Lee Goldberg, who wrote the books while he was still a teenage UCLA student, under the supervision of his professor, novelist Lewis Perdue (The DaVinci Legacy, The Queensgate Reckoning, Daughter of God etc). Goldberg would later go on to write and/or produce such TV shows as Monk, Diagnosis Murder, SeaQuest, and The Glades co-create the hit Hallmark Mystery movie series Mystery 101 and write many more novels, including fifteen best-selling “Monk” mysteries, five internationally bestselling “Fox & O’Hare” novels co-authored with Janet Evanovich, and in a nod to THE JURY SERIES, the “Ian Ludlow Thriller” trilogy: True Fiction, Killer Thriller, and Fake Truth. He is also the author of Lost Hills.

“A high-octane mystery that moves like a bullet-train!” —Janet Evanovich

“Can books be better than television? You bet they can — when Lee Goldberg’s writing them.” —Lee Child

“Leaves you guessing right up until the heart-stopping ending.” —Lisa Gardner

“Lee Goldberg can plot and write with the best of them.” —Mystery Scene Magazine

“If great pacing with awesome characters is what keeps you up at night, then make a pot of coffee and open this book.” —Crimespree

“Grabs you from page one with brilliant wit, sharply honed suspense, and a huge helping of pure originality.” —Jeffery Deaver

“With books this good, who needs TV?” —Chicago Sun Times

“Lee is one of my favorite writers for so many reasons—plotting, character, or his incredible sense of humor. Suffice to say that Goldberg is one infinitely readable master of crime fiction, and King City is Lee at his best.” —Craig Johnson

“You’d be hard-pressed to find another recent work that provides so many hip and humorous moments.” —Bookgasm