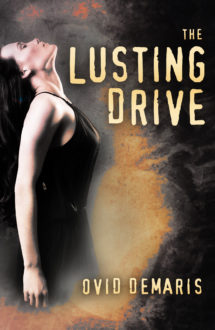 THE LUSTING DRIVE By Ovid Demaris

He was a man on fire… who took what he wanted when he wanted it.

Guy Hill is pure evil, a washed-up movie star who returns to his hometown, seduces & marries the owner of the furniture company that is the life blood of the entire community, and then he murders her. He takes over the business and becomes the local King, holding everyone in the thrall and terror of his lusting drive for sex and power. His only adversary is his one-armed brother, the local Sheriff, who is powerless to stop him… until the car belonging to Guy’s “missing” wife is pulled from the cold depths of a local reservoir. Now Guy’s grip on power begins to erode, exposing the dark passions, deep corruption, and the lusting drives of everyone in the town.

“A modern-day western crime story about a guy who ‘runs the town’ through fear and intimidation (and because he owns the biggest employer) who is pitted against his one-armed brother, who is the Sheriff. It could easily have been set in the 1800s in the old west. It’s a fast, fun, pulpy pleasure.” Lee Goldberg, #1 New York Times bestselling author