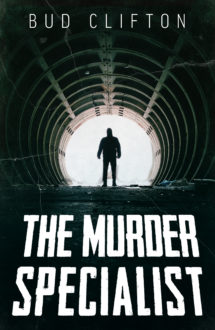 “THE MURDER SPECIALIST is recommended to all fans of noir mysteries, and those who enjoy unexpected twists to an otherwise familiar crime story.” Bookgasm

Hal Williams is a specialist with one particular talent to sell: contract murders that appear to be accidents. He’s a professional who does his job with cool, calm, and calculated detachment… or so it seems. It’s all part of a long-term plan for ultimate revenge. But just when everything is coming together…he meets Unne, a mobster’s coldly sensual mistress, a kindred spirit with a dark, devastating secret of her own… and everything changes.

Bud Clifton was a pseudonym for David Derek Stacton (1923-1968), an acclaimed American poet and author, under various names, of literary fiction, historical novels, and soft-core gay porn. He was a two-time recipient of a Guggenheim Fellowship and also received a Literature Fellowship from the National Endowment for the Arts. His work ranged from lurid tales like D is for Delinquent to a non-fiction book about the fall of Constantinople. His books under his own name include The Bonapartes, The Judges of the Secret Order, A Signal Victory and People of the Book: A Novel of the Thirty Years War. He died in Denmark in 1968.

“John Banville comes to mind as an author who so easily switches gears from fustian to fetid….[his] peculiar blend of the oracular and the mischievously ironic makes him an invaluable cicerone in any setting, ancient or modern….it is fascinating to watch Stacton working out in the noirs the kind of novelist he would become. From the beginning, Stacton is drawn to a certain kind of person, the kind who is the ‘victim of the propulsive force of his own character.’” Los Angeles Review of Books

“The prose of David Stacton is like that of no other writer. It suggests a corridor in a dark Gothic tower, ill-lit by tapers, at one end of which a gong sounds incessantly. Stacton’s gong clashes are malevolent aphorisms, asides spoken to Nemesis, hard little explanations of motive.” Time Magazaine

“The most unjustly neglected American novelist of the post-war years, David Stacton’s ambitious high style and melodrama have seen him banished. It’s time for a return to favour. Few writers have managed more fully than Stacton to bear out Gore Vidal’s maxim that writers shouldn’t ‘write what they know” but, rather, what they imagine or suspect.’… and yet, Stacton himself can be seen to hide in plain sight behind everything he wrote.” The Guardian (London)

“David Stacton is a major writer who has the approval of critics but so far lacks the consent of readers at large. In short, it’s the story of literary virtue unrewarded… his novels are enjoyable as well as admirable.” Oakland Tribune