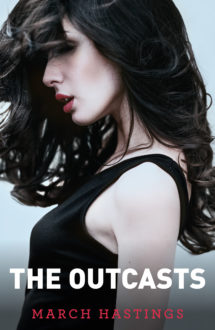 THE OUTCASTS By March Hastings

An explosive novel that exposes the magnetic pull of forbidden lust

Two couples join for a weekend of escape from New York… a getaway that becomes a cauldron of boiling temptations that would ignite their long-buried desires and shatter their lives. It’s the story of Leigh Whitman, a rich, married woman who has everything a woman could desire… and yet aches to indulge her repressed, compulsive desires, aroused now by Jennie Dunbar… a emotionally-torn woman trapped in a decomposing marriage and who now finds herself yearning for a different kind of touch, a different kind of love…

“(March Hastings aka Sally Singer) writes in a provocative way that is visually stimulating and somehow still timeless. Regardless of whether you like lesbian pulp-fiction (newsflash: this is my first foray into it), The Outcasts has this riveting subplot that involves Leigh’s freakish husband. As the novel ascended from kinky foreplay into heightened arousal, Singer successfully incorporates an element that is mostly found in Gothic Romance – the beautiful young woman trapped in the mansion of doom. Leigh’s odd basement combined with her equally odd husband added a sense of panic and fear to what would otherwise be a tame lesbian romance. I believe this additional element upsold me from liking to loving this book. Based on sheer reading pleasure, I’ll be reading more of Sally Singer’s literary work.” Paperback Warrior

“March Hastings” was one of the pseudonyms (along with Laura Duchamp, Viveca Ives, and Alden Stowe) of Sally M. Singer, a lesbian writer born in 1930s and reputedly the author of more than 130 novels, across many genres, in her lifetime. She is undoubtedly best-known for her string of ground-breaking, lesbian-themed, sexy pulp paperbacks in the 1950s and early 1960s, including Three Women, The Third Theme, Veil of Torment, and The Demands of the Flesh. She wrote many other sexy novels as Hastings, not all of them with a lesbian theme. However, by the late-60s/early 70s, the “March Hastings” pseudonym was co-opted by her publisher and became a house name for many different authors penning lurid paperbacks (one of them being prolific pulp author Len Levinson, whose first novel Private Sessions was released under her name), diluting and confusing her early legacy as an influential author of lesbian pulp and straight erotic fiction.