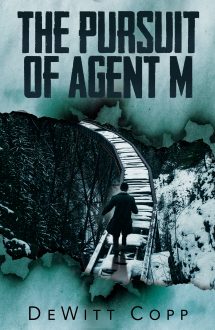 The Pursuit of Agent M By DeWitt Copp

“From cliff-edge to cliff-edge — a relentless thriller.” Buffalo Evening News

It’s 1961, the height of the Cold War. Mark Costain is a deep-cover U.S. intelligence agent working in a Czech aircraft plant when his true identity is exposed. He kills the security chief and escapes, fleeing into the treacherous mountains in a desperate bid to reach the Austrian border, relentlessly pursued by the ruthless Secret Police.

“An escape and chase novel in the purest sense,” San Francisco Chronicle

“A tense and breathless novel,” Charleston News and Courier

“The writing and style of the book are superior.” Los Angeles Times

“A chase story in the best tradition.” Washington Post

“For hairs-breath escapes, this yarn could hardly be surpassed.” Boston Globe

“The meat of this novel is the chase. Costain’s desperate attempt to escape the country when exposed and hunted is a classic cat and mouse game. Costain’s flight is tense, gripping and fraught. This is a tense, visceral, fast moving, action thriller but with a rounded anti-hero at its heart. His introspection and confused moral/emotional compass elevate this thriller. ” Crimetime UK