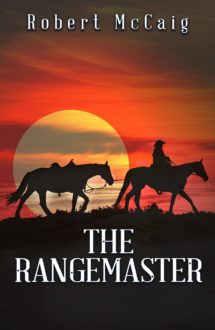 THE RANGEMASTER By Robert McCaig

The invisibile dictator of the Dakotas fattened his herd on terror…

Til Edmonton knew that the Dakota prairie he saw through his train window was every bit as bleak as his future. His brand was scattered, his wife and child murdered by marauders. And then a trigger-happy hardcase tries to kill Til and a woman traveller he’s befriended. Now Til finds himself pitted in a brutal battle for the land, for justice, and ultimately for vengeance with an adversary known only as The Rangemaster… an enemy who won’t quit until one of them is in the dirt.