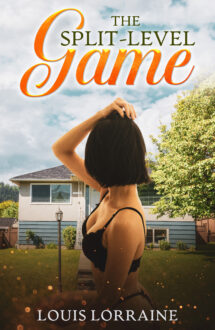 The Split-Level Game By Louis Lorraine

When Lelia was Spence Hawk’s secretary, she went out of her way to satisfy all of his whims and physicals desires. But now that they are married, and living in a split-level home in suburbia, she’s concentrating on satisfying her own, seemingly insatiable physical needs in this new, free-wheeling society where all the norms are questioned. She made a game of it — quantity over quality, that was what counted. Spence is enjoying the freedoms too, but is also beginning to feel the price, especially after a no-rules, “trade partners” party shatters everything.

“In the 1962 potboiler The Split-Level Game, protagonist Spence Hawk is fed up with his thrill-seeking wife Leila and ‘the rotten crowd in the suburbs where they lived, the Upper Dales set.’ They go to a tiki party where the women dance under orange spotlights; the rule is that no one can object to what their spouse does during the party, like ducking into a bedroom with another guest. [This is] one in a raft of books about suburban life that appeared steadily through the 1950s and 1960s […] the books can tell us a lot about the preoccupations of midcentury Americans. Most strikingly, they reveal deep and widespread concern over the stability of mental and physical health in the new suburban environment. [They] represented not just new places to live but a whole new manner of living, separated by more than physical distance from the big cities and small towns from which their residents hailed. The first suburbanites themselves were well aware of this. Although they felt the optimism of pioneers, they shared in the widespread anxiety that the experiment might not work.” Amanda Kolson Hurley, Curbed