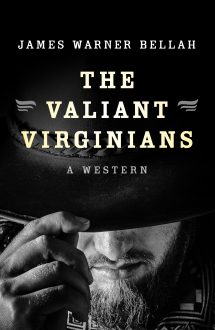 “His atmosphere of camp and trench, march and counter-march, has the look and sound of well-observed truth. Here are plain soldiers in actual war.” Chicago Tribune

When the south called for fighting men, Roan Catlett, Davin Ancrum and Forney Manigault are the first to sign up, three untried cavalry troopers awaiting the onslaught of the Union tide under the command General Stonewall Jackson, learning the taste of victory and defeat, the dulling pain of fatigue and the swift touch of fear, as they struggle to keep the entire Union Army from pouring into the Shenandoah.

“This tale of the Civil War centers around a trip which might be compared to Dumas’ Three Musketeers. Their adeventures are just as laughable and exciting.” Sacramento Bee

“Those whose traditions are deeply rooted in the South can’t afford to miss reading The Valiant Virginians. The six battles [are] described so graphically that the reader lives them with the soldiers.” Morristown Gazette

“A beautiful history built around three young men…who become veterans while their officers learn how to handle them,” Memphis Commercial Appeal

“No military knowledge is required to understand and enjoy this book, but a good deal of military knowledge, and even more military understanding, will seep through in reading it. These are stories of the manhood and the heart…clothed in a language that is slow and easy, as direct and dignified as the speech of the Virginia mountaineer.” Richmond News Leader

“The historical authenticity of the scenes is unquestionable, and the narrrative moves swiftly. This is a book that should please the devotee of historical novels.” Baltimore Evening Sun

Be sure to read the sequel, Ordeal at Blood River.