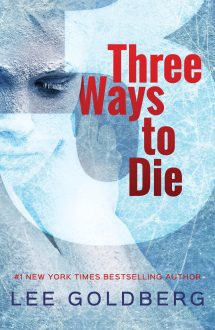 In “Jack Webb’s Star,” a struggling reporter comes up with a bizarre scheme in a desperate attempt to reinvigorate his love life.

In “Remaindered”, a once-famous novelist embarks on a self-financed book tour through middle America to save his career…and discovers a novel way to die.

In “Bumsicle,” a homeless woman freezes to death, unlocking troubling memories for a weary cop and a powerful Chief of Police.

PRAISE FOR THE STORIES IN “THREE WAYS TO DIE” ….

“Jack Webb’s Star is a darkly funny story about a heist that could only happen in Hollywood. The author is on top of his game,” Seattle Post-Intelligencer

“I loved everything about it. More awesomeness from Lee Goldberg,” Sara Gran, author of “Dope” and “Come Closer.”

“One of the wiliest short stories I’ve read in many years. Lee Goldberg at his very best,” Ed Gorman, Mystery Scene Magazine