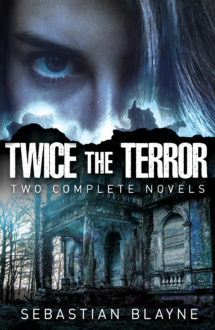 The story of a passion that knew no law…

Every time Moira tried to flee from the past, there was a paralyzing terror, the spectre of evil to torture her. Every loving embrace, every kiss, was under the shadow of death. Someone wanted her dead…each attempt had failed so far, but soon the killer would get it right.

Blayne is equal parts Nero Wolfe, Simon Templar and Hercule Poirot… and he is aided in his adventures by his bald, Italian valet Beppo, his red-headed secretary Maggie, and his French poodle Misty…and the ever-diligent NYPD homicide detective Simon Fennelley.

But can he save her…and himself… from a holiday in hell?

This book was previously published under the title Gay Ghastly Holiday.

TERROR IN THE NIGHT

Memo from Maggie MacMahon: “I’m going back. I guess I’m too ‘lace curtain Irish stubborn’ to be scared off. You say I have bride’s jitters, but Neddy, I know someone in the dowager house means to kill me. The town will be filled with terror for me and I’ll dread the streets at night. I only hope my murderer isn’t Curt, because that would mean I’m marrying a psychopath. Remember how we used to drink Courvoisier out of the toothbrush glass? Will you miss me Neddy? Your loving secretary, Maggie.”

Is Sebastian Blayne’s secretary marrying a psychopathic killer? Will Blayne find the answer before she’s killed…or will he die trying?

“Sebastian Blayne” was the pseudonym that writer Jan Huckins adopted for two crime novels written in the early 1950s. She was born in 1911 in Oklahoma City, where her parents owned the Huckins Hotel (her mother later jumped to her death from the 8th floor in 1949). She wrote freelance articles for newspapers and magazines and ghost-wrote the scripts (for writer Irma Phillips) for the popular 1942 radio serial “Lonely Woman,” which she also novelized. In 1959, she co-authored the novel Face of My Assassin under her own name with Carolyn Weston. Huckins died in Santa Monica, California in 1981.