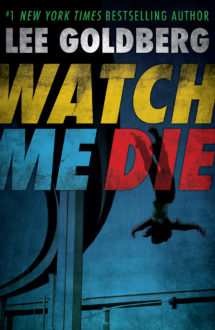 WATCH ME DIE By Lee Goldberg

The lowly security guard jumps at the opportunity to fulfill his private eye fantasies and use everything he’s learned from Spenser, Magnum, and Mannix. But things don’t exactly go according to the books… or the reruns. As Harvey fumbles and stumbles through his first investigation, he discovers that the differences between fiction and reality can be deadly.

With the help of his mortgage broker neighbor and occasional lover Carol, Harvey uncovers a blackmail plot that takes a sudden and unexpectedly tragic turn… plunging him into a world of violence, deception and murder… and forcing him to discover what it really takes to be a private eye.

“A wonderfully fresh voice in the mystery genre, Goldberg will delight fans of Janet Evanovich and Robert Crais.” —Rick Riordan, author of Percy Jackson & the Olympians

“Goldberg has a knack for combining just the right amount of humor and realism with his obvious love for the PI genre and his own smart ass sensibilities. […]A terrific read. Goldberg is the real deal and should be on everyone’s must read list.” —Crimespree Magazine