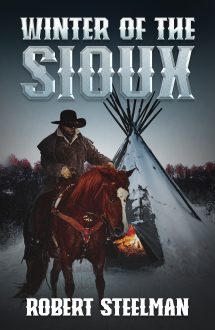 Winter of the Sioux By Robert Steelman

The Sioux were among the greatest of Indian nations. Strong, proud and unequaled as fighters. And to the white settlers in the plains, they were predators, a nightmare-made-real. There were few white men who survived an encounter with the Sioux, even fewer who earned their respect and their friendship.

One man did, a professional gambler and gunfighter named Beau Mannix.  No one could have imagined, most of all Mannix himself, that  one day he would struggle a hundred miles through a blizzard to get help for the “savages”….or that he would be honored and loved by the Sioux, but hated and hunted by his own people.

This is the story of a man with a dream, a vision so strong that it drove him to reject his own people…who was not by nature a warrior, but whose courage, fighting ability, and singleness of purpose earned him a place in the hearts of the Sioux nation.