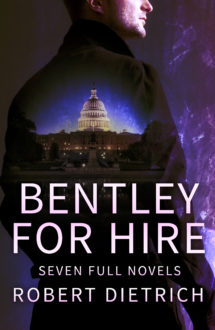 Seven Sizzling Novels in the Steve Bentley Series in One Action-Packed Ebook!

“There just aren’t enough hard-drinkin’, two-fisted, pistol-packin’ playboy accountants, if you ask me.” The Thrilling Detective

MURDER ON THE ROCKS
Steve Bentley has a tendency to get into trouble… and this time it comes from two women, daughters of an American diplomat, who want him to find a 29-carat emerald known as Madagascar Green is missing from their father’s safe… and the search for it soon pits Steve against drug smugglers and killers.

END OF A STRIPPER
Linda Lee was a stripper… but to Steve Bentley, she would always be the honey-skinned child with hair the color of spun taffy, a warm-hearted kid with soft lips and soft body. And now she was dead.

HOUSE ON Q STREET
Steve agrees to help Francie Ballou, a teenage addict and mother who is ensnared in a murder plot that involves the mob. To get her out of it, Steve may have to do some killing himself…

MISTRESS TO MURDER
In life, he’d been every inch The Baron… master of an old Victorian mansion in Georgetown and all he could survey. But now Baron Alejandro Esquivel was dead…and it was up to Steve to find out why.

MURDER ON HER MIND
She was a lush-bodied, Latin Chanteuse with a song on her lips, passion in her heart, and murder on her mind… and Steve could be her next victim.

ANGEL EYES
She Died The Way She Lived… in the Heat of Passion. Now Bentley is Going to Make Her Killer Pay.

“A Washington-based CPA, Bentley fits the stereotype of a private eye better than an accountant. He’s is hard-hitting, adventurous and attractive to women. The most interesting novel, from an historical point of view, is ‘Angel Eyes.’” Encyclopedia Mysteriosa

CALYPSO CAPER
Steve Bentley travels to the Virgin Islands, a tropical paradise where the weather is hot and the women are hotter…to find out who killed his old friend, a casino boss.