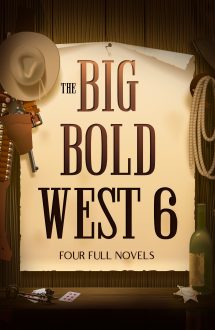 THE BLACK RIDER by Burt Arthur
Through a storm of lead and gunsmoke they rode toward a roaring, flaming death…toward Deadwood and destiny.The outlaw rode the trail alone with a price on his head. Every lawman and bounty hunter in Texas was after his hide. He lived by his wits and by his gun. The outlaw had many names, and just as many notches on his six gun. They called him The Black Rider. He wasn’t running. He was seeking vengeance in Deadwood. But first he’d have to save a helpless woman from a pack of land-grabbing killers…even if that meant teaming up with the relentless lawman who’d vowed to track him down, dead or alive. That was fine with both men. They’d just have to kill each other later.

ARKANSAS GUNS by William Macleod Raine
“The tale starts in a cantor and breaks into an early gallop that continues through 248 pages. Raine uses all his old tricks to kindle tension.” Salt Lake Tribune

The proud and iron-willed Harvilles have been engaged in a bloody feud with the stubborn Logans, a neighboring family of bluebloods, since the recent end of the Civil War. But that doesn’t stop Larry Harville, returning to the family plantation after years away in England, from falling in love with a Logan woman…and when bloody-thirsty, outlaw killers ride into their Arkansas town, the families must put their violent hatred aside to fight a common enemy.

ORDEAL AT BLOOD RIVER by James Warner Bellah
The mighty Colorado River was known as blood river to the single, U.S Cavalry troop charged with policing the thousands of miles of hostile, Arizona territory around it…and where they are pitted against foreign mercenaries intent on snatching the land for themselves. But the blue-clad troops, battle-tested in the Civil War, and under the command of the relentless Lt. Flintridge Cohill, aren’t willing to give an inch of the blood-soaked dirt to anyone. Arizona is a land where a man accepts total responsibility for what he does, and does whatever it takes to survive, or he’s vulture meat.

THE TRAIL BOSS by Walter Gann
“Best cowhand in the whole state of Texas and he ain’t afraid of hell fire, neither.” That’s how Bill Sanders, top trail bos of the Lone Star country, was known by his crew… a man of tact, skill and ingenuity who had a will of steel and a sentimental spot in his cowboy heart for the one-horned, outlaw steer Sancho, whose path he crossed many times. Rustlers, cow thieves, and bandits right roughshod through the pages of The Trail Boss, giving Walter Gann’s story the same vivid, picturesque and authentic qualities as The Virginian.