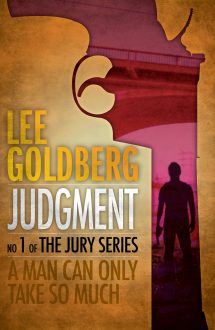 Brett Macklin was a freewheeling son of sunny California, a collector of vintage cars and a connoisseur of beautiful women. But when his father is murdered by a street gang, Macklin becomes something else–a deadly weapon against crime, a relentless vigilante who won’t stop until he’s wiped out the killers who have turned Los Angeles into a war zone.

“Top-shelf 80’s adventure fiction. The Mr. Jury books are probably about the most fun you can have doing so vicarious vigilanting. There’s a reason Goldberg is still a successful author. There’s plenty of smooth and fast action.” Bloody Spicy Books Blog

“Judgment  has an amped-up, neon-bright,’burning rubber down the main drag doing sixty while blaring Motley Crue so loud you can’t even think’ sort of quality. And that’s how I like it.” —Post-Modern Pulps

“Generous helpings of sex and violent action, along with some smart-aleck dialog. But if you’re a fan of Robert B. Parker, Dirty Harry, or the Die Hard movies, you’ll have a very good time,”  —J.A Konrath, author of THE LIST and AFRAID

“Lee Goldberg’s The Jury Series serves vengeance hot with loads of action and plenty of suspense to keep you turning the e-pages. Vigilante justice was never so much fun,”  —Joel Goldman, Bestselling author of “Motion to Kill”

(Originally published as the first book in the “.357 Vigilante” series, under the pen name Ian Ludlow.)

Other books in the series: ADJOURNED, PAYBACK, and GUILTY