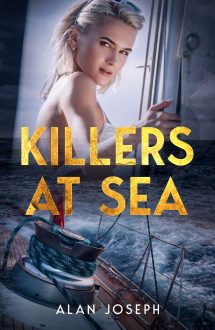 Killers at Sea By Jon Messmann

The second and final Logan adventure. The sea-faring man-of-action finds a corpse on the beach…and is drawn into a hurricane-force storm of danger, diamonds, and death.

Logan is a dangerous, hard-hearted man as restless and unpredictable as the sea itself. He’s walking along the wind-swept dunes of South Carolina on a gray, misty morning when he comes across the brutalized body of a beloved character the locals called “the old man of the beach.” But someone has beaten this harmless man to death…and left behind his grieving niece, a beautiful, head-strong young woman bent on vengance. Logan reluctantly agrees to help her and they’re instantly targeted by a relentless pack of vicious assassins. So Logan and the woman head out to sea…and right into the center of a furious, epic hurricane.