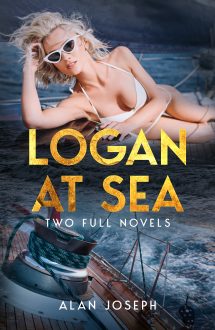 Killer at Sea and Logan, two long-lost, fast-moving, thrill-packed crime novels by Jon Messmann (writing as “Alan Joseph”) are combined into a single ebook with a new introduction by Eric Compton, co-host of the Paperback Warrior podcast.

Logan is a sea-faring adventurer with a dark, mysterious past…and a hair-trigger temper. He can’t be scared. He can’t be bought. And he’s as turbulent and dangerous as the seven seas.

Logan is walking along the wind-swept dunes of South Carolina on a gray, misty morning when he comes across the brutalized body of a beloved character the locals called “the old man of the beach.” But someone has beaten this harmless man to death…and left behind his grieving niece, a beautiful, head-strong young woman bent on vengance. Logan reluctantly agrees to help her and they’re instantly targeted by a relentless pack of vicious assassins. So Logan and the woman head out to sea…and right into the center of a furious, epic hurricane.

Logan is docked in Panama. He returns to his boat with a lusty lady that he picked up in a bar…and finds a dead woman already in his bed. So it’s no surprise to Logan when the police arrive moments later, tipped off by an anonymous caller. Logan is sure the frame-up has something to do with refusing, the night before, a $10,000 offer from a stranger to take care of a “delicate job.” The stranger had warned him that they wouldn’t take no for an answer.  Now, to avoid torture and prison, Logan is forced into doing a dangerous mission: sailing his boat and a sexy, mysterious woman into a South American war zone to dig up a corpse of a supposedly dead revolutionary for a positive I.D…and that’s only the beginning of his troubles.