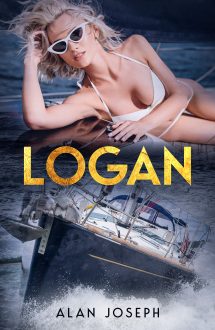 The first of two fast-moving, thrill-packed novels about a man-of-action known simply as Logan, a sea-faring adventurer with a dark, mysterious past…and a hair-trigger temper. He can’t be scared. He can’t be bought. And he’s as turbulent and dangerous as the seven seas.

Logan is docked in Panama. He returns to his boat with a lusty lady that he picked up in a bar…and finds a dead woman already in his bed. So it’s no surprise to Logan when the police arrive moments later, tipped off by an anonymous caller. Logan is sure the frame-up has something to do with refusing, the night before, a $10,000 offer from a stranger to take care of a “delicate job.” The stranger had warned him that they wouldn’t take no for an answer.  Now, to avoid torture and prison, Logan is forced into doing a dangerous mission: sailing his boat and a sexy, mysterious woman into a South American war zone to dig up a corpse of a supposedly dead revolutionary for a positive I.D…and that’s only the beginning of his troubles.

“Alan Joseph” was the pseudonym of the amazingly prolific Jon Messmann, author of the Revenger, Handyman and The Trailsman (as Jon Sharpe) series.