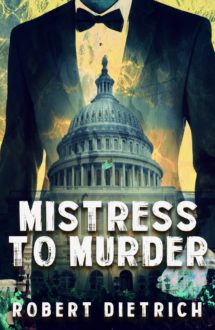 In life, he’d been every inch The Baron…master of an old Victorian mansion in Georgetown and all he could survey. But now Baron Alejandro Esquivel was dead, just so much fodder for the worms…and it was up to Steve Bentley, ex-Spy-turned-CPA, to find out why. He has plenty of suspects . . .like Anita Esquivel, the Baron’s Lady, an unladylike nymph who stopped at nothing. Including her husband’s chauffeur. Then there are the Baron’s business acquaintances. They all have a motive for murder because The Baron was a very democratic man—he cheated everybody. But suspect number one was a frightened, lonely kid named Megan, Anita’s half-sister and the only decent person in that whole crazy household. Megan was nineteen, and cynical for her years. But she had been just another wide-eyed innocent girl the first night the Baron came to her room…

“Mistress to Murder, and the Steve Bentley series as a whole, is excellent crime-fiction written by an experienced, seasoned pro. While Bentley doesn’t receive the same fanfare as other private-eye literary heroes, I think his steadfast willingness to do good things for people in peril is unmatched. The crimes are detailed, the characters dynamic, and the pace is flawless. All of the elements contribute to Mistress to Murder’s success. This is just another great novel proving that this series is a cut-above your average gumshoe procedural.” Paperback Warrior

Robert Dietrich was a pseudonym for E. Howard Hunt, better known for his role in the Watergate scandal rather than for his great crime novels. Gore Vidal wrote this about “Robert Dietrich” in The New York Times:  “In 1957, H.H. gave birth to ‘Robert Dietrich.’ who specialized in thrillers, featuring Steve Bentley, formerly of the CID and now a tax consultant. H.H. plainly enjoys composing plausible (and implausible) biographies for his characters—not to mention for himself. In Contemporary Authors, H.H. composed a bio for his pseudonym Robert Dietrich, taking ten years off his age, putting himself in the infantry during Korea, awarding himself a Bronze Star and a degree from Georgetown.”