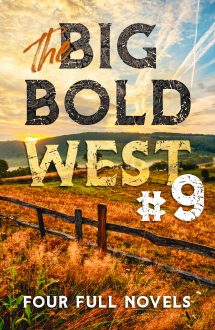 Four rip-roaring, epic novels of western adventure in one volume!

Texas Ranger Walt Slade, a relentless and fearless lawman, takes on the brutal Campo Santo gang, desert killers who rode in a hail of gunfire into the bustling boomtown of Washout and left it littered with corpses.

Wandering cowboy Clay “Slow” Burgess finally returns home to Palo and discovers that his father, the town banker, has been murdered and his ranch taken by Big Dave Dawley, a vicious land baron who rules the territory with absolute terror… and bloody violence. Now Burgess must fight for vengeance, for his land, and for the love of a good woman. But what his adversaries don’t know is that Clay’s nickname is a cruel irony, because when he’s pushed, he kills quick with blazing guns of righteous fury.

Mustang Marshall finally returns home…but he isn’t welcome. And a knife-wielding killer is waiting to gut him from head to toe.

In the horrific quiet before the battle, Captain MacLaw handed his pistol to the woman he loved and said: “There are six cartridges. Save one for yourself.” If it came to that, she would… and take six savages with her.

Over a thousand Indians are coming to attack the wagon train, kill the men, and ravish the women. The Captain’s troop of forty battle-weary men, willing to fight to the death, is all that stands between the Indians rampage and a massacre.