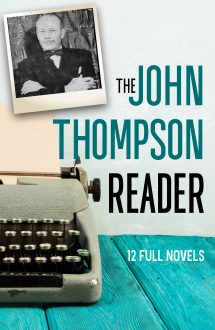 The John Thompson Reader By John B. Thompson

“With colorful characters and multi-faceted, interlocking storylines, John B. Thompson creates a whirlwind novel ripe with violence and racial unrest. Fans of Charles Williams, Harry Whittington, and Erskine Caldwell should find plenty to like.” Paperback Warrior

Here are 12 scorching novels of lust, adventure, crime, tragedy and romance by John B. Thompson, an under-appreciated author of sharply observant, brilliantly-written stories of the deep south in the 1950s & ’60s. Unfortunately, his books were packaged and marketed as “sleaze” for their uncompromising explicitness. So his bold work fell into obscurity. Now they are back in print for the first time in over 60 years.

John Burton Thompson (1911-1994) was a Louisiana native and World War II veteran who wrote 75 books under his own name and many others under pseudonyms, including Kevin McLeod, Bowie Morton, Gordon Greene, Todd Marshall, and Burton St. John.

He studied engineering in college and spent four years in the United States Marines in the Pacific, from Samoa through Saipan. He broke into publishing in 1950 at age 39 by writing a fan letter to Jack Woolford, author of two books on writing, and a controversial author of “sleazy” fiction. Woolford encouraged Thompson to send him copies of his unpublished manuscripts. Thompson did, and Woolford immediately sold them (including his first novel, Male Virgin), beginning a professional co-authoring and publishing relationship that would last for several years…and get them both into trouble in the early with New York City police for writing “indecent work.”

But Thompson’s many novels, racy at the time and tame by today’s standards, were clearly a cut above what other authors were doing in the “sleaze” genre. He had literary aspirations and, surprisingly, often achieved them with his strong characters, rich writing, and provocative plots, which were psychological and cultural dramas mostly set in his native Louisiana.

He wrote one western, Gunman’s Spawn as Ben Thompson, and it sold 250,000 copies, but the publisher went out of business and he wasn’t able t break into the genre again, much to his disappointment. Although he wasn’t known as a crime writer, many of his “sleazy” books were dark, hard-boiled noir tales, as well written and sharp as anything being published  in that genre. But his work went unnoticed as noir, doomed by the marketing and packaging of his work (though plenty of hard-boiled novels in the 1950s and 60s had equally salacious covers).

Cutting Edge is proud to be reprinting most of his early, hard-to-find books in new ebook and paperback editions.