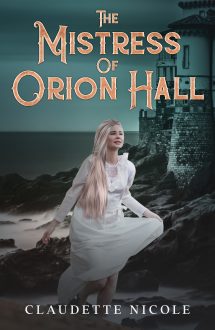 A gothic suspense classic, back in print for the first time in 50 years!

“The heroine climbs cliffs, wields a gun, and incapacitates various male characters while wearing only a bikini that miraculously stays in place. The forerunner of today’s romantic suspense novel.” Lori A Paige, The Gothic Romance Wave: A Critical History of the Mass Market Novels 1960-1993

Lisa is living a quiet life in Vermont when she’s asked by her Aunt, who lives in England, to help her move to Orion Hall ancient, ocean-front castle in Cyprus that’s steeped in legend…and mysterious secrets. There Lisa meets Demetrius, the strong, dark, classically handsome young Greek…and Michael, an uninhibited archaeologist. Both men share with her stories about the haunted castle. At first, Lisa is enchanted and intrigued. But she soon realizes to her horror that someone is trying to destroy her…and that she’s being stalked at night by a wailing, shrouded figure who may have risen from the dead.

“A good novel of love and suspense… with a surprising climax. It is well done.” Green Bay Press-Gazette

“Claudette Nicole” was a pseudonym for Jon Messmann, a prolific author of crime novels, spy thrillers, westerns and gothic suspense.