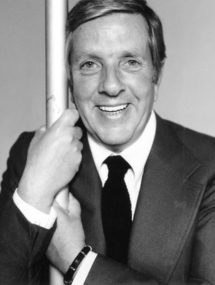 Throughout the 1950s, Richard Himmel worked by day as an interior designer and at night as a successful writer of paperback original crime novels. His first book, I’ll Find You, was a massive, multi-million copy bestseller that almost single-handedly put Fawcett Crest’s famed Gold Medal Paperbacks on the literary map. He followed that book with four sequels in the “Johnny Maguire” series and four stand-alone novels.

Johnny Maguire hadn’t visited Chinatown in a long time, and now he wasn’t there for the tourist attractions. Not that the Chinese Keyhole didn’t have plenty to offer—if you liked that sort of thing. Behind its pseudo-Oriental facade, the strip club provided unusual entertainment for its off-beat clientele… and the performers were weirder than those who paid to watch them. There was the statuesque blonde dancer for instance. She left nothing to the imagination of her audience, and she was beautiful: but she just wasn’t Johnny’s type. And he wasn’t crazy about her partner, either—the muscular but mincing ballet dancer who carried a vicious-looking whip and didn’t hesitate to use it.

The wife of the biggest mob boss in town walks into Johnny’s office with a suitcase full of stolen cash and asks for his help. She’s also Johnny’s first love, the woman who ripped out his heart ten years ago. He knows he should say no… but he can’t stop himself.

THE RICH AND THE DAMNED

Two-fisted lawyer Johnny Maguire is caught in the middle when a wealthy industrialist dies and leaves him in charge of executing the inheritance… which his dead client’s four children are desperate to grab. The children include the industrialist’s two daughters, one of whom has shared Johnny’s bed and another who would like to. Meanwhile, a mobster is eager to take over the dead man’s business… even if it means killing.

They were lost when they tried the dangerous bypaths of love.

From the bright lights of fame, they fled into the a darkness with their burden of guilt. They loved, but the disease of hate ate into their love, twisting and torturing it. They fled into the bypaths of love, and found they could run from everything but themselves.

Kit Greer was a war widow. Lovely, young and very lonely… the startling story of a woman who could not forget the past and a man who dared not remember.

Would he ever have the strength to resist her? To call his life his own once more?

Clarissa…in her arms, Peter achieved manhood. She taught him that to love too many women was to love none at all. He was obsessed with her, drugged by her warmth and willingness. By now, he was ready to kill himself and her if she refused him…

A cold-blooded Arab sheik and his army of psychopathic terrorists use blackmail, kidnapping and murder to force hundreds of rich Amercan Jews to stop giving money to Israel, part of a complex effort to economically cripple the Jewish nation. One man, Justice Department attorney Peter Frankel, leads the fight against the insidious plot, drawing him into an inescapable web of twisted sex and brutal violence.

It’s 1982. Angus MacGlendon is an American business tycoon targeted by the Chinese as a key player in their secret plot to become a global industrial and economic superpower… and they will do whatever it takes, from blackmail to violence, to get him to cooperate. He soon becomes a target of the CIA, KGB and spies from Taiwan. To survive, he must play a complicated game of international intrigue and terror with the fate of the world in the balance…

The fourth Johnny Maguire adventure…back in print for the first time in over sixty years!

A big movie star’s dark and sordid past in a stag movie comes back to haunt her — it’s up to Johnny to keep it buried, without getting buried himself.

CRY OF THE FLESH

Ne’er-do-well playboy & lounge singer Buster Clayton, living in Italy on his ability to seduce wealthy women, is strong-armed by his brother, famous journalist Maxwell Payton, to help the daughter of a Russian diplomat defect with a cache of secret documents that will make an explosive story… and spark an international incident. But all is not what it seems, and soon Buster and the woman, a seductive and deadly cipher herself, are fleeing through Europe, running a gamut of sex, lies, betrayals, and certain death.

An undercover CIA agent living as a centerfold model and all-around hustler is the key player a deadly, global game of intrigue and death where the players include a sexually-ravenous TV newswoman, a powerful Mafia don, and foreign assassins…. but who are actually the hunters and who are the prey for the lions at night?

THE COMPLETE RICHARD HIMMEL – All 12 Novels

Four complete novels of raw, hard-boiled, pulp noir greatness by three masters of the genre, back in print for the first time in sixty years.