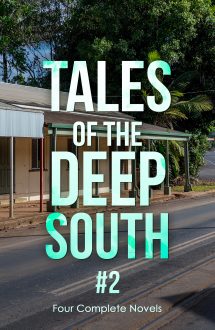 “A deep Southern ‘who-didn’t-do-it’ dripping with Spanish moss and suspense…brim full of nostalgia, nymphomania, and night-rhythmns, to say nothing of implicit incest, patricide, matricide, and fratricide.” The Observer (London)

Dana Hebert will do anything to stop his brother Claude from marrying Annalisa, a hauntingly beautiful and dangerous woman they’ve known since they were children, when the three of them first shared their murderous secret. But this is a family rife with dreadful secrets, and Grand’mere, the chatelaine of Bon Plaisir, knows and hides them all within her tortured soul and the frightening walls of the half-castle, half-prison that she lives in…the home of Dana’s youth. There is also their Great Aunt Celia, who has remained a child for all her years, never quite maturing, obeying Grand’mere’s every command. And there is Aunt Mirabelle, who has lived within herself, tasting the bitter wine of her loneliness. But most of all, there is Bon Plaisir itself, doorway to the past, to tragedy, and to terror.

CIRCLE OF SECRETS by Claudette Nicole

“An interesting and frightening tale that reaches an unusual climax.” Green Bay Press-Gazette

It begins with a ringing phone and a familiar voice in the night. A voice filled with sadness and terror.

“I need you. I need you here. You must come down…now!”

It’s Kim Morrison’s college friend Mary Ellen, begging her to come to Starset, the family mansion on Heron Island, a strange remote place off the Georgia coast. For Kim, it’s a summons too desperate to ignore. But from the moment Kim arrives, she’s plagued by violence and savage accidents. And most terrifying of all, Mary Ellen isn’t there. Because she’s been dead and buried for three years. But Kim is certain it was Mary Ellen’s voice on the phone. Something horrifying is going on…and if Kim isn’t careful, she could be the next one in a grave.

OUT OF THESE FLAMES by John B. Thompson

It’s the early 1950s. Plantation owner Colonel Bertram Fendelson finds himself having to raise Larry, his dead brother’s grandson, after the boy’s parents die far too young. The Colonel hires Eleanor, a local waitress who is college-educated and the target of the morally-righteous women in town, to tutor his nephew. But Eleanor is no Mary Poppins, and her presence is like touching a flame to gasoline, igniting a household that’s already raging with resentment, greed and barely-controlled lust.

Joe Carter works as a rigger for rich Houston oil magnate Sam Forsythe and falls for Paula, his boss’ seductive young wife. But she gets pregnant and draws Joe into a murder plot that will either make them both rich… or put him in an early grave with a knife in his back.