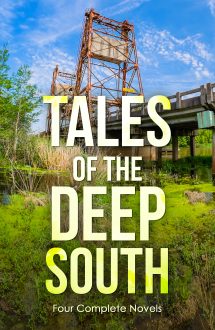 Four powerful, controversial, highly-acclaimed novels set in the deep south during the 1950s and early 1960s that deal with politics, race, crime, and sex in bold, exciting stories that reflect the turbulent era…and leave a lasting impression. All these novels are back in print for the first time in over 60 years… and collected for the first time ever in one massive ebook.

FACE OF MY ASSASSIN by Carolyn Weston and Jan Huckins

“An exciting melodrama dealing with integration in the South…a thorough examination of southern racial attitudes. The book has the power to move and enlighten readers.” Los Angeles Times

t’s 1959. Matthew Scott is a widowed, alcoholic reporter from New York who seeks personal and professional redemption when he’s sent to the Deep South to write about a town that is defying a U.S. Supreme Court decision to integrate blacks into schools. His mere presence is a catalyst that ignites long-buried racial, political, religious, and personal conflicts among the residents, both white and black, ripping the town apart. Those tensions violently explode when Scott is falsely arrested by the bigoted, tyrannical sheriff for the rape and murder of an out-spoken black school teacher.

Jack Candless is a drunken, cynical, 32-year-old newspaper reporter who covers a rape case in a small, Louisiana town, hoping the sordid story of a sweet, innocent young woman being brutally violated in a rice field will make national headlines, saving his career and his marriage. Instead, he discovers nothing is what it seems, and that a far more frightening story of raw lust and corruption is buried in the dark, violent heart of the bayou.

A small town in the deep south is rocked to its racist core Maybelle Brown arrives from Philadelphia to live with her grandmother…and becomes the first black student ever enrolled in the local college. But that’s only the beginning of the explosive problems her arrival creates. Because Maybelle also becomes romantically involved with a white man, crossing an unthinkable line in a community terrified that a rising tide of color will destroy their heritage.

A WIND IS RISING by William Russell

“A powerful and moving novel that should be widely read,” Cincinnati Enquirer