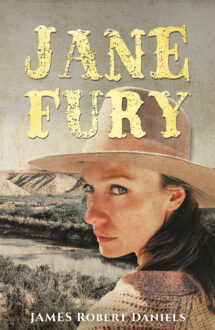 It’s been years since the brutal ordeal that earned teenage Jane Fury the nickname The Comanche Kid. Her violent, tragic past is a secret now, one she’s tried to forget herself. But then a simple, chance encounter in a small, Texas town brings it all back in ways she never expected. To save everything and everyone she holds dear, Jane straps on her guns again and rides into Mexico with an inexperienced posse, a handful of Texas Rangers and her head-strong, 15 year-old daughter. It’s an epic journey that will push Jane to the limits of her endurance, her brutality and her compassion…and force her to discover who she really is.

“Jane Fury is a gal to ride the long trails with, flipping pages till deep in the night. It was amazing. Classic western storytelling in such a free and easy style. It really brings the Southwestern and Mexican culture to life. Another blazing winner from the gifted newcomer, James Robert Daniels!” Peter Brandvold, multiple Spur Award-winning author of the Bloody Joe Mannion series

“Jane Fury is well-written and filled with fascinating, colorful, well-developed characters. We really get to know the people in this classic Western tale, and their lives are important to us. It manages to be funny and heartbreaking at the same time, and the action scenes are superbly done and very effective. This is certainly one of the best books I’ve read in recent years. –– James Reasoner, New York Times bestselling author of the Outlaw Ranger series