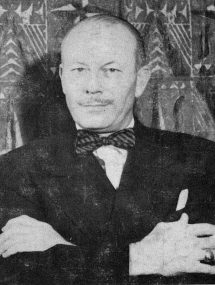 John Burton Thompson (1911-1994) was a Louisiana native and World War II veteran who wrote 75 books under his own name and many others under pseudonyms, including Kevin McLeod, Bowie Morton, Gordon Greene, Todd Marshall, and Burton St. John.

He studied engineering in college and spent four years in the United States Marines in the Pacific, from Samoa through Saipan. He broke into publishing in 1950 at age 39 by writing a fan letter to Jack Woolford, author of two books on writing, and a controversial author of “sleazy” fiction. Woolford encouraged Thompson to send him copies of his unpublished manuscripts. Thompson did, and Woolford immediately sold them (including his first novel, Male Virgin), beginning a professional co-authoring and publishing relationship that would last for several years…and get them both into trouble in the early with New York City police for writing “indecent work.”

But Thompson’s many novels, racy at the time and tame by today’s standards, were clearly a cut above what other authors were doing in the “sleaze” genre. He had literary aspirations and, surprisingly, often achieved them with his strong characters, rich writing, and provocative plots, which were psychological and cultural dramas mostly set in his native Louisiana.

He wrote one western, Gunman’s Spawn as Ben Thompson, and it sold 250,000 copies, but the publisher went out of business and he wasn’t able t break into the genre again, much to his disappointment. Although he wasn’t known as a crime writer, many of his “sleazy” books were dark, hard-boiled noir tales, as well written and sharp as anything being published  in that genre. But his work went unnoticed as noir, doomed by the marketing and packaging of his work (though plenty of hard-boiled novels in the 1950s and 60s had equally salacious covers).

Cutting Edge is proud to be reprinting much of his early, hard-to-find books in new ebook and paperback editions.

Books by John B. Thompson

This novel, originally published in 1952, was substantially rewritten and re-released nine years later under the title TEXAS TRAMP by a different publisher. Both versions are available from Cutting Edge Books.

Ex-G.I. Frank Barden is an unlicensed investigator hired by a millionaire to be his personal, in-house detective, unearthing the secrets of his family and his investors. It's a pursuit that reveals the powerful passions of the woman in the tycoon's life: Little Dene, who has sex, murder and money on her mind...and in that order. Big and beautiful Prett, who can brawl almost as viciously as she can love, and there's Marlo, whose cunning and lust were more than a match for any man.

A ravished girl. A ravishing woman. Their beauty and burning desires inflamed the Southern town, bringing out the raw passions of every man around them. Some men wanted them. Some men feared them. And some men were their prey....

A long-lost masterpiece of Louisiana noir by John B. Thompson.

Here are 12 scorching novels of lust, adventure, crime, tragedy and romance by John B. Thompson, an under-appreciated author of sharply observant, brilliantly-written stories of the deep south in the 1950s & '60s. Unfortunately, his books were packaged and marketed as "sleaze" for their uncompromising explicitness. So his bold work fell into obscurity. Now they are back in print for the first time in over 60 years.

Honey is a young, mixed-race woman involved in a tempestuous romance with white boy. Together they discover that passion is color-blind...and dangerous. It's a frank story of love and hate, of generosity and selfishness, of tradition-bound Southerners caught up in a conflict of races, emotions and desires...told across two raw, edgy, novels: Honey and the sequel Love in Louisiana, back in print for the first time in over seventy years and combined into one edition.

Ex-G.I. Frank Barden is an unlicensed investigator hired by a millionaire to be his personal, in-house detective, unearthing the secrets of his family and his investors. It's a pursuit that reveals the powerful passions of the woman in the tycoon's life

Born to be Bad. A vivid, hard-boiled, daring story of strange needs and searing love, of a woman too seductive to be safe...even from her own flesh-and-blood.

Tom's marriage to blue-blooded and frigid Bertha was arranged by his high-society New York family and has been a farce for years. So he begins a hot romance with beautiful Iris. The three of them become helplessly trapped in the web of their seething desires...and there is no escape.

Passion in the Pines

Evil Ravaged the Back Country... Setting it Ablaze in Flames of Lust.

It's 1959, and the Cold War is Red Hot. American spy Rayne Cantey is sent on a secret mission to Asia, where he must obtain a smalll, steal box containing a deadly secret that could tip the balance of global power.

A Federal agent goes to Mexico to foil an espionage plot, but becomes embroiled with a woman and the anceint, pagan rituals of the Mayans. His raging desire could get him killed...and take our country down with him.

This was the first novel written by John Burton Thompson (1911-1994), a Louisiana native and World War II veteran who wrote 75 books under his own name and many others under pseudonyms, including Kevin McLeod, Bowie Morton, Gordon Greene, Todd Marshall, and Burton St. John.

Four vintage, scorching, hard-boiled novels set in the Louisiana Bayou...all in one volume.

Out of These Flames

It's the early 1950s. Plantation owner Colonel Bertram Fendelson finds himself having to raise Larry, his dead brother's grandson, after the boy's parents die far too young. The Colonel hires Eleanor, a local waitress who is college-educated and the target of the morally-righteous women in town, to tutor his nephew. But Eleanor is no Mary Poppins, and her presence is like touching a flame to gasoline, igniting a household that's already raging with resentment, greed and barely-controlled lust.

A young, beautiful woman inherits some money and hits the road to find herself...and quench her passions.

Nude in the Sand

Lecia McCauslan sought a tainted love that brands her an outcast. Although Lecia's husband desires her with ardor, he also lusts for Dora Jones, a wanton swamp girl... while his wife answers the irresistible call of the bayou, where she knows a dark stranger furtively watches her pagan sacrifices to passion...and yearns for her.

ONE MORE FOR THE ROAD

This is harrowing, seductive, and suspenseful a coming-of-age novel about Jack McKnight, a young man terrorized by his evil mother and beaten by his cruel half-brothers from her previous relationship. His mother and step-brothers are furious that Jack’s late father willed half of his estate to him, his only biological heir. Their bitterness towards Jack becomes so extreme, that he begins to suspect that they are plotting to murder him…

Deep in the hot swamplands of the South, a desperate man on the run meets a woman of raw, natural beauty whose ravenous sexual desires could lead them both to sweet, ecstatic ruin.

BORN TO BE MADE

Before EMMANUELLE, there was the story of Marvelle Martingale… a heart-stoppingly beautiful woman’s awakening of aching desire and her daring journey of carnal discovery as she explores every facet of her scorching sexuality in her quest for shattering, physical bliss and true love.

THE GIRLS OF THE FRENCH QUARTER

Every Color of Skin… Every Kind of Sin. A novel of men on the loose and women on the prowl.

The story of three girls who run a household of the dubious yet sprightly kind to be found only in Paris and the French Quarter of New Orleans. Their purpose is to love when and how they chose, their habit is to follow their desire wherever it lead. Favre experiments with a father but settles for his sons. Arden seeks the caresses of an artist… but also longs for Favre’s kisses. And there’s T’Ling, a sweet girl with golden skin, who takes love where she finds it. Are these three wicked? Or merely naughty? A rollicking, frolicking novel by the comparable John B. Thompson.

Dick Gamble knew all the answers… and as far as willing Jenny and tempting Annette were concerned, he did. He divided his time between their lavish charms. It became more difficult when he met Karen… but he wasn’t the only one who wanted her. And then, in one savage hour, everything changed… as if a bomb had been dropped on their town.

Into the Big Bend Country rode wild Dunc Stewart, a headed for trouble and the girl, Carmelita. Then old Hamp Wallace took cards into teh game, his blazing guns siding law and order. Dunc knew that some day he'd be sharing a triple showdown with Hamp and the notorious Jugg Allison...and one of the three was the fastest draw in Texas. They wouldn't know who until the last man was standing.