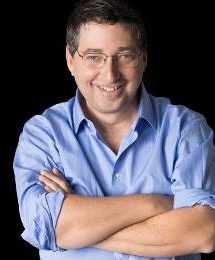 Lee Goldberg writes books and television shows. He published his first book .357 Vigilante (as “Ian Ludlow,” so he’d be on the shelf next to Robert Ludlum) while he was still a UCLA student. His many subsequent books include the non-fiction Successful Television Writing and Unsold Television Pilots as well as the bestselling Eve Ronin and Ian Ludlow series.

He wrote the eight books in the Diagnosis Murder series of original novels, based on the hit CBS TV mystery that he also wrote and produced. He followed that up by writing fifteen bestselling novels based on Monk, another TV show that he worked on. His Monk novels have been translated and published in Germany, Poland, Thailand, Japan, Turkey, and many other countries.

In addition to his writing, he’s worked as an international TV development expert and consulting producer for production companies and major networks in Canada, France, Germany, Spain, Sweden, Belgium, and the Netherlands.

A sadist with a hunger for victims is talking the streets of Los Angeles--leaving a trail of destruction which threatens to engulf the city in racial violence. And he's calling himself...Mr. Jury.

Brett Macklin faces his greatest adversary yet--a ruthless, professional hit woman, seductress and master of disguise who launches a campaign of terror and bloodshed against him, pushing the vigilante to the emotional and physical breaking point, unleashing a bloody killstorm on the L.A. streets.

The first novel in the Jury Series. Brett Macklin was a freewheeling son of sunny California, a collector of vintage cars and a connoisseur of beautiful women. But when his father is murdered by a street gang, Macklin becomes something else--a deadly weapon against crime, a relentless vigilante who won't stop until he's wiped out the killers who have turned Los Angeles into a war zone.

The James Bond Films 1963-1989: Interviews with the Actors, Writers & Producers

The Dreamweavers: Fantasy Filmmaking in the 1980s

Science Fiction Filmmaking in the 1980s

Ex-cop Charlie Willis handles "special security" at Pinnacle Pictures. His job: to protect the studio and its stars, to stop scandals before they explode, to keep the peace in the land of make-believe. When Pinnacle revives the cult, 1960s TV series Beyond the Beyond as the cornerstone of a fourth network, two powerful forces fight for control of the show—a talent agency that uses blackmail, torture, and murder to keep its clients on the A-list, and a homicidal legion of rabid fans led by an insane actor who thinks he's in outer space.

Los Angeles cop John "Tidal Wave" McGrave is an unstoppable force of nature who always gets his man...even if it means laying waste to everything around him, including his own career...which is exactly what happens in his pursuit of Sebastian Richter, the ruthless leader of an international gang of violent thieves.

My Gun Has Bullets

The outrageously funny thriller about Hollywood that only Lee Goldberg, the #1 New York Times bestselling author and hit TV producer, could have written.

When Beverly Hills Police Officer Charlie Willis pulls over a speeding Rolls Royce hell-bent for Neiman Marcus, he’s surprised to see Esther Radcliffe, the geriatric star of the TV series Miss Agatha, behind the wheel. He’s even more surprised when she guns him down and keeps on driving.

Did Gilligan and his fellow castaways ever get rescued? Is Dr. Marcus Welby still making house calls? Is Marcia Brady single? What kind of father did Beaver Cleaver grow up to be? Did Steve Austin and Jaime Sommers finally tie the bionic knot?

Those burning questions... and many, many more... about your favorite TV characters are finaly answered in the new, 2015 edition of this unique and entertaining book, which examines every TV series revival, sequel or remake that was made from the 1950s through the early 1990s.

Best TV Shows That Never Were

This lively and entertaining book looks at the three hundred best and worst TV series ideas—known in the industry as "pilots"—that never made it to primetime from 1955-1990. From the adventures of a Samurai D.A. to the antics of an invisible alien baby, Lee Goldberg reveals the most astonishing, funny, and bizarre shows that never were.

Marty has been expecting this day all his life. In his car are a pair of sturdy walking shoes and a backpack of food, water, and supplies. He knows there is only one thing he can do … that he must do: get home to his wife Beth, go back to their gated community on the far edge of the San Fernando Valley.